The fifth in the Tried & True Series: Trusted Models that Stand the Test of Time.

I’m a big fan of the work done by Grenny, Maxfield, and Shimberg on what makes change initiatives successful. According to their research, initiatives are ten times more likely to succeed when the change strategy includes at least four of six approaches.

The trick is to address both people’s motivation and their ability. It’s not enough to want to change. They also have to know how to change. And they can have all the knowledge in the world but, if they don’t want to change, they won’t. So far, that makes sense.

The change strategy depends, however, in working at multiple levels. Leaders are used to working at the individual level (tie to the mission and provide training). They’re also used to addressing the structural level (develop rewards and create environments that support change). The new level, the missing piece in most change initiatives, is the social level: drawing on peer networks and creating social momentum for change.

Sound difficult? Our new graphic, Six Ways to Influence Change, makes it easy to understand. The implementation, though, is up to you. 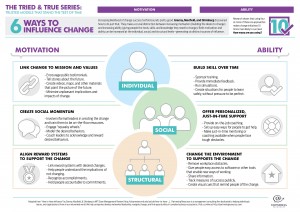 Transition: The Human Side of Change
Three Jobs of the Change Leader

Is Your Strategy Stuck in the 20th Century?

Learn how to tune your strategy for our complex world with our twin set of strategy docs: Four Strategic Questions For An Uncertain World, and Is Your Strategy Stuck in the 21st Century? Sign up and join our low volume list. We'll never share your information with anyone. Period.

I have never enjoyed an off-site more nor participated in one that was so well controlled and focused. Your theme was consistent & truly inspirational for our group.

Is your strategy stuck in the 20th century? 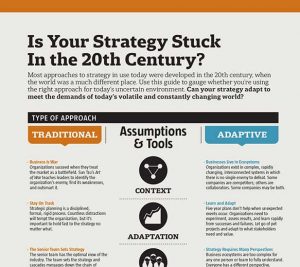